What Makes a Good Economic Model? 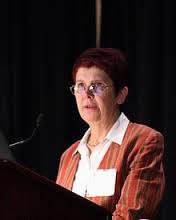 Recent events that have received wide coverage in the media have led to increased scepticism about the results of economic models. If an economist tells you that their model produces a certain result, how do you know they can be trusted?

Professor Mary Morgan of the London School of Economics and the ESA’s Eminent Speaker for 2016, will explain what makes an economic model a useful tool for economists. She will discuss some of the characteristics that make models good working objects and potential pitfalls to watch out for.

Mary Morgan is Professor of History and Philosophy of Economics at the London School of Economics and Vice President (Publications) at the British Academy.

She also holds a professorial appointment at the University of Amsterdam and is a visiting fellow at the University of Pennsylvania. Her major area of scholarship is the history of economic and econometric ideas. Her recent award winning book, The World in the Model (Cambridge University Press, 2012), considers modelling as a method of enquiry, the imagining and imaging of economic ideas (to consider the way that images emerge and are developed over time to give form, and greater clarity, to economic thinking), model experiments, the uses of simulations and a range of other issues.