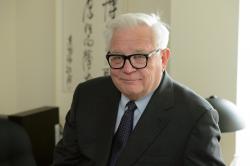 The Economic Society of Australia (ACT) and the Research School of Economics at the ANU wish to invite you to the October edition of First Friday Economics (FFE). FFE is an exciting initiative aimed at enriching the professional and social lives of Canberra economists. We aim to provide a congenial setting, on the first Friday of every month, to allow the interaction of mainly young Canberra economists, with a major Canberra economist invited to give a short address.

For the October event, we are pleased to have James Riedel speaking on What’s Behind US and Global Trade Imbalances?

Three separate but integrally related questions are addressed in turn:

Finger food and drinks will be served

Please register by 2 October 2019 for catering.

James Riedel is Professor Emeritus of International Economics at the Johns Hopkins University School of Advanced International Studies. He joined the Hopkins faculty in 1976 and retired as the William L. Clayton Chair Professor of International Economics in 2017.  He has also held teaching positions at Hong Kong University, Nanjing University, and Fulbright University Vietnam.  He was a visiting scholar at the Institute of World Economics (Kiel), Nuffield College Oxford, and the Australian National University-NDSC.  He was Senior Economic Advisor to the USAID-funded project assisting the government of Vietnam in implementing the VN-US BTA and Vietnam’s accession to the WTO (2002 to 2013). He was a member of the Board of Directors of the Vietnam Debt Fund (Dragon Capital Group) from 2008-2018. He has been a consultant to the World Bank, the Asian Development Bank, the Inter-American Development Bank, the China Development Bank, the OECD and other international organizations and corporations. He is a Trustee of the American Committee for Asian Economic Studies and on the advisory board of the Hong Kong Centre for Economic Research. He serves on the editorial boards of a number of international peer-reviewed academic journals in the field of economics. He has published widely in the areas of international trade theory and policy, international finance and economic development.  His most recent book is How China Grows: Investment, Finance, and Reform (Princeton University Press, 2007).